A winter storm upgraded to a “Bomb Cyclone” was making its way across Oregon Tuesday with heavy snow and gusty winds creating hazardous driving conditions throughout the state.

“A strong winter storm will bring heavy snow starting late this afternoon into Wednesday night,” according to the NWS office in Pendleton. “The heaviest snow will occur along the east slopes of the Oregon Cascades, Central Oregon, North- Central Oregon, the John Day-Ochoco Highlands, and the Washington Cascades. With breezy conditions associated with this storm, expect areas of blowing and drifting snow.”

Forecasters say the heaviest snow fall is expected between 4 p.m. Tuesday afternoon and midnight. Snow could fall as much as one half inch to one inch per hour.

The warning extends from noon on Tuesday to 4 p.m. on Thursday.

Central Oregon Daily Meteorologist Scott Elnes says the Bend/Redmond/Sisters areas should expect 3 to 6 inches overnight into Wednesday’s commute and up to a foot through Thanksgiving Day.

He said Mt. Bachelor should expect to see as much as 30 inches of snow in the next 24 hours.

A lack of early season snow meant Mt. Bachelor wasn’t planning on running lifts Friday during its “Hopening Day” event. But those plans could change by the minute as the ski area eagerly awaits the expected snowfall.

The National Weather Service warned travel would be “very difficult” because blowing snow could significantly reduce visibility – and they were quickly proven right with multiple crashes being reported all over the region.

ODOT Tuesday afternoon was reporting white-out conditions on Willamette Pass and warned drivers to “expect blizzard conditions at times in this stretch, making travel very difficult or even impossible.”

The NWS in Portland reported that heavier snow was expected this evening at Santiam Pass and Government Camp, which were both already snow-covered by mid-afternoon. ODOT went as far Tuesday afternoon to advise folks not to travel along the I-5 corridor and other southwest interior Oregon highways. Several highways are closed due to either blizzard conditions and downed trees.

It issued a statement saying “Oregon 138 east of Roseburg is closed due to blizzard conditions from Toketee east to U.S. 97. Oregon 62 from Prospect north, including Oregon 230 to Diamond Lake Junction, is also closed due to white out conditions. Oregon 255 (Carpenterville Highway), which parallels U.S. 101 between Pistol River and Brookings, is closed due to downed trees.

Chains are required both northbound and southbound on the I-5 Siskiyou Summit, south of Ashland. Caltrans is also reporting chain requirements south of the border with heavy snow, blizzard conditions and crashes near Mt. Shasta. Significant traffic back-ups have been observed on road cameras. Caltrans is holding northbound commercial trucks at Redding. Delay travel into this area.

Oregon Highways 38, 42, 42S and U.S. 101 are also reporting either downed trees or power lines, though all remain open to at least a single lane as of Tuesday afternoon.

Travel is not advised in southwest Oregon tonight. Be prepared for wind, low visibility and poor winter driving conditions until the storm passes. Motorists are urged to drive to the conditions as there have been numerous spin-outs and crashes.

Monitor www.Tripcheck.com in Oregon and Quickmap.dot.ca.gov in California for the latest travel conditions.”

With the expected snowfall, some good reminders from the City of Bend:

Sign up here for Snow Emergency Notifications. You can also check back here on the City website, social media sites, TV and radio news.

If your vehicle is buried and cannot be moved:

If your vehicle is buried in snow in the right-of-way and cannot be moved, make every attempt to periodically clear off built up snow. Pile snow away from the right-of-way and as far back from storm drains. Plows cannot always judge a vehicle vs. a large snow berm. Do your part in removing obstacles that may be in the way of the plows.

The City is exploring policies that would help the City clear the busiest streets more efficiently and effectively. We are discussing prohibiting parking on some major streets during certain snow emergencies to help facilitate snow plowing. Stay tuned! More to come on this topic.

Don’t forget there’s a parking garage if you need to park while you’re downtown. Parking in the garage at 61 NW Oregon Avenue is free for three hours and you can keep your windshield from getting buried in snow while you’re out!

The City of Bend snow plow operators take pride in clearing the streets on their routes as quickly and thoroughly as possible. We strive to keep traffic moving during extreme weather conditions and travel will be limited. We ask the community to drive cautiously, safely and do not follow closely behind nor pass the snowplows.

Which Streets Does the City Plow?

When two inches of snow or more has fallen, the City of Bend’s Streets Department plows public streets starting with Priority One major collectors and arterials, followed by Priority Two collectors, and if snow accumulations reach 6 inches or more we move on to Priority Three residential streets and special requests. The City does not maintain private properties, apartment complexes, alleys or private streets. Snow removal will not be provided in these areas.

Do not let children play in snow berms near roads! Encourage children to play and build their “snow forts” in the back/front yard or on private property and NOT in the right-of-way snow/ice berms. Plows cannot always see children!

Minimize potential for snow berms in front of your driveway. To do so, clear a wide apron in front and to the right of your driveway or walkway (when facing your property from the street). This allows snow that the plow has accumulated to drop off before it reaches your driveway.

If you believe plows have missed your street, please fill out a Service Request or call the Streets Department at (541) 317-3000 ext.3.

Many of our neighbors rely on a clear sidewalk to get to and from work, school or bus stops. To help keep our sidewalks safe and passable for your neighbors during winter snow storms, it is the responsibility of property owners to shovel sidewalks that border your property.

Tips From Some Old-Timers: 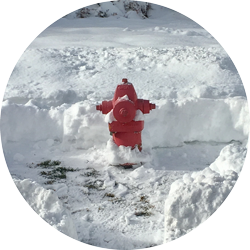