By Brooke Snavely
Central Oregon Dail
Central Oregonians are still cleaning up after Friday’s severe storm that dropped up to six inches of hail in places. Tumalo farmers and homeowners who are still discovering damage to homes and crops.

This was a big storm in a lot of ways. Here’s a telling example: Move these branches and here’s some hail three days after it fell. It’s still here.

“Our shade cloth was on the ground covered in hail. It was suspended on wires between the house and garage and with all the hail weighing it down tore down, it was gone,” said Jean Fish.

Jean and Rob Fish say it hailed so hard it washed the grit off their roof shingles.

“We’ve got dimpling on the top of our car. It totally decimated the roof of our travel trailer. All the plastic on the air conditioning cover is gone, just shredded. My husband and I are kind of in shock. Every time we look around we find more damage, one more thing.”

Gwen & Jim Millard found dents in their home’s aluminum siding, shredded window screens and layers of debris knocked out of their trees

“I can’t believe it didn’t break that window because of the way it broke the shutters,” Gwen said. “I don’t know if you can paint plastic shutters.”

“I sent a lot of pictures in to the insurance company by email. Luckily we are covered for hail.”

Sykes Mitchell says about 25 acres of nearly mature hemp plants were bent over by the hail and stripped of many of their leaves. He applied fertilizer and three days later, the plants have perked back up.

“Those tips sticking up like that tells me that resilient plant is doing everything it can to survive…up like this,” he said. “When they turn down, they are pretty easy to read. When they’re sad, they’ll point their limbs down and be kind of limp. But this, this is a glimmer of hope.” 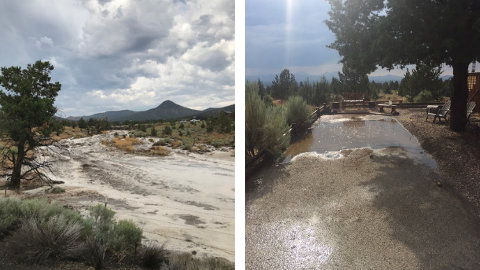